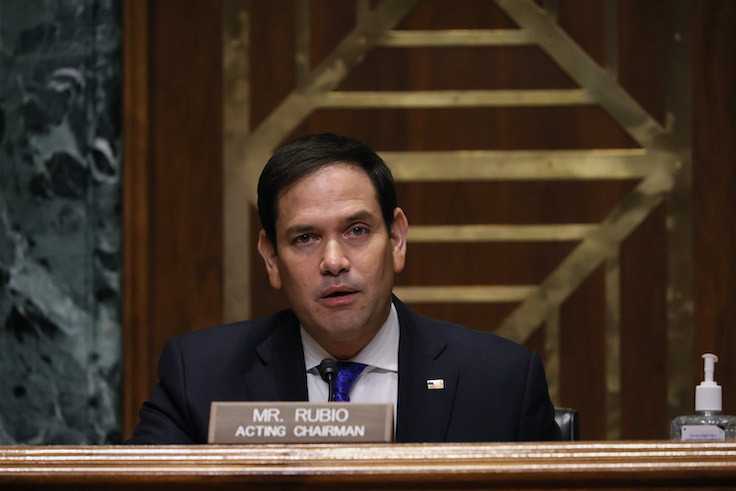 Sen. Marco Rubio (R., Fla.) is demanding the Biden administration's Department of Homeland Security explain its decision to end the deportation of illegal immigrants, which could include those convicted of violent crimes, rape, sexual assault, and other felonies.

Rubio calls for immediate clarification on a directive issued this week mandating "an immediate pause on removals of any noncitizen with a final order of removal," in a letter sent Friday to David Pekoske, acting secretary of the Department of Homeland Security. Rather than deporting illegal immigrants, DHS said on Wednesday it will focus on processing immigrants along the Southern border and rebuilding "fair and effective asylum procedures that respect human rights and due process." This also includes "a review of policies and practices concerning immigration enforcement."

Rubio says that the broad directive will pave the way for illegal immigrants scheduled for deportation to remain on extended stays in the United States. The policy shift, Rubio says, raises concerns about how the new administration will address the persistent border crisis. Joe Biden's first days in office have been marked by a blitz of executive orders rolling back Trump administration policies, including ending construction on the border wall running along the southern United States. These executive orders contrast with Biden's own rhetoric urging reconciliation, unity, and centrist government policies.

"President Biden is talking like a centrist, but he is governing like someone from the far left. I am very concerned that this move by DHS could allow some incredibly dangerous criminals to remain in America," Rubio told the Washington Free Beacon. "We need answers now."

Rubio's letter focuses on concerns that DHS's directive will halt the already scheduled removal of illegal immigrants, including those with criminal records and convicted felons.

The new memorandum realigns U.S. policy on the deportation of illegals by listing "public safety" concerns as a lower priority than both national security threats and illegals caught crossing the border since November 2020. The order is unclear about whether illegal aliens convicted of crimes prior to Jan. 19 of this year will be deemed a priority in the deportation process.

"Does this mean someone convicted of an ‘aggravated felony,' including rape or sexual abuse of a minor, is not a priority for removal if they were released from jail on or before January 19, 2021?" Rubio asks in his letter.

Illegal immigrants will only be deported during this period if Immigration and Customs Enforcement's acting director intervenes on a case-by-case basis.

Rubio is also seeking clarification on this point, asking: "Does the ‘pause' on removals apply to someone convicted of an ‘aggravated felony' such as rape or sexual abuse of a minor, who was released from jail on or before January 19, 2021, unless the acting director makes an individualized determination that ‘removal is required by law'?"

DHS is also laying the groundwork to reopen already concluded deportation cases, though it is unclear if this will apply to convicted felons scheduled to be sent out of the country.