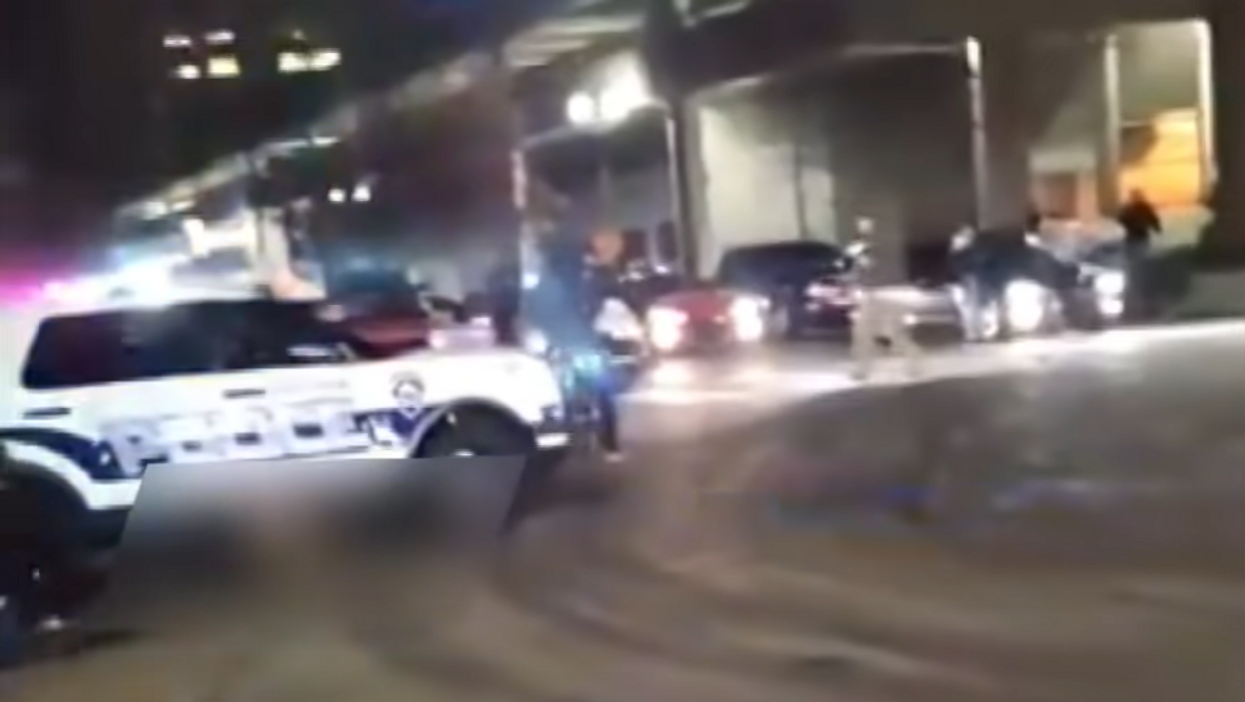 A Tacoma Police officer has been temporarily placed on leave after plowing through a crowd in Washington state. The dramatic and graphic scene was captured on video.

Tacoma Police were responding to a "car meet" that allegedly got "out of control." Video shows cars doing "burnouts" and "donuts" in the middle of an intersection. The car meet had "approximately 100 people present blocking the intersection when officers arrived on scene," the Tacoma Police said in a press release.

At one point, one of the vehicles doing donuts appears to hit an onlooker.

Wait hang on a second. This guy got hit by a car tonight during the street show #Tacoma but nobody cared...what giv… https://t.co/oAr8oPBRoE

"Tacoma Police officers responding to the location began clearing the intersection of vehicles and people for the safety of those gathered and people trying to use the street," the police department stated.

The Tacoma Police Department statement said the crowd surrounded the vehicle, and people "hit the body of the police vehicle and its windows as the officer was stopped in the street."

"The officer, fearing for his safety, tried to back up, but was unable to do so because of the crowd," the press release said. "The officer had his lights and sirens activated. While trying to extricate himself from an unsafe position, the officer drove forward striking one individual and may have impacted others."

Videos from the scene of the incident show the stopped police SUV and the crowd gathered around it. Then the police vehicle accelerates forward, plowing into the crowd. The vehicle knocks several people to the ground, and one man is seen in the video being run over by the front and rear tires.

Car meet at 9th and Pacific downtown has gotten out of control. Cops are swarming, reports of Molotov cocktails bei… https://t.co/lHcp5kpctn

#BREAKING video of the Tacoma police plowing through a crowd of people and running over a person as he speeds away.… https://t.co/6pxqFWlOSQ

One person sustained a laceration from the incident and was transported to a local hospital. The police were unaware of the person's condition.

City Manager Elizabeth Pauli told the News Tribune that the officer driving the vehicle would be placed on leave. The investigation has been turned over to the Pierce County Force Investigation Team.

"I am concerned that our department is experiencing another use of deadly force incident," interim Tacoma Police Chief Mike Ake said. "I send my thoughts to anyone who was injured in tonight's event, and am committed to our Department's full cooperation in the independent investigation and to assess the actions of the department's response during the incident."