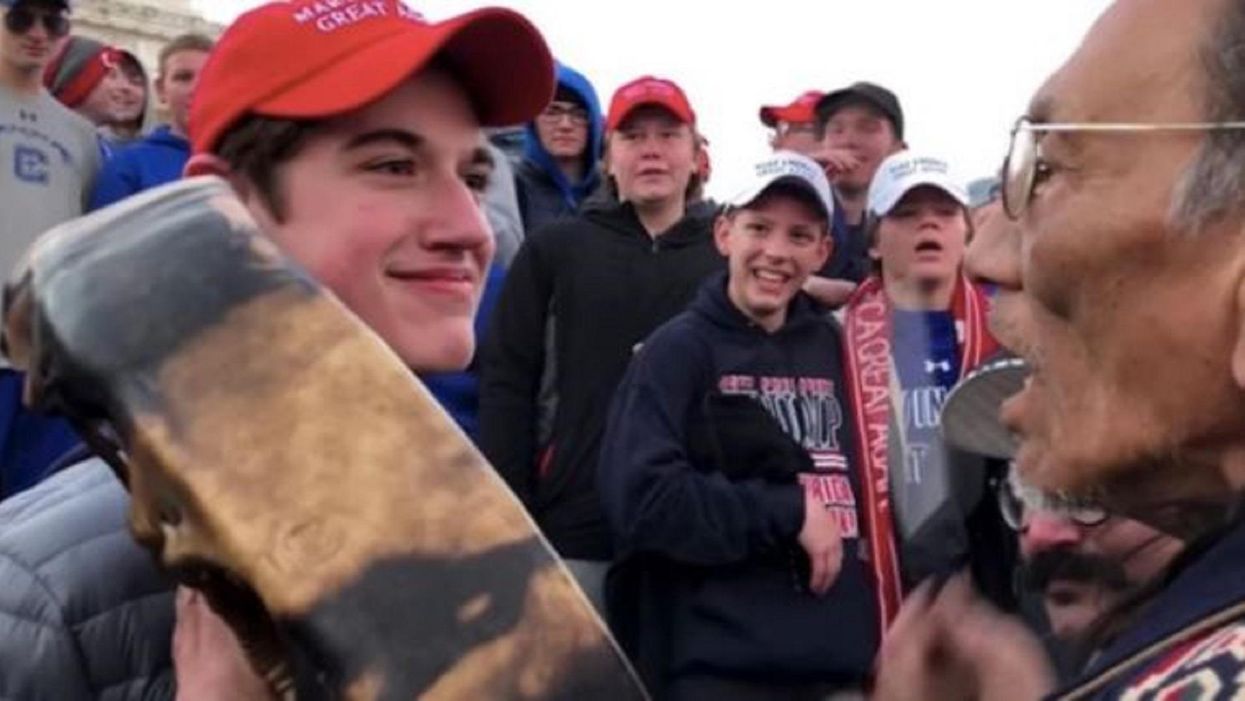 Nick Sandmann has fired fellow Trump-supporter Lin Wood, who represented the Kentucky teenager in defamation lawsuits against several media outlets after a 2019 video went viral showing the then-Covington Catholic High School student in a face-off with a Native American man in Washington, D.C.

Reuters reported Monday that Sandmann said in a court filing, "I have ended my lawyer-client relationship with Mr. Wood and no longer wish to be represented by him."

Wood did not immediately respond to a request for comment. In a statement shared on the Telegram app on Sunday, Wood said he expected Sandmann would "abandon" him because of earlier social media posts in which Wood suggested former Vice President Mike Pence engaged in "treason" and could "face execution by firing squad" for formally recognizing the election victory of President Joe Biden.

Wood said in the Telegram post that his comments about Pence were "rhetorical hyperbole."

Earlier this month, Wood tweeted, "If Pence is arrested, @SecPompeo will save the election. Pence will be in jail awaiting trial for treason. He will face execution by firing squad. He is a coward & will sing like a bird & confess ALL."

Sandmann replied, "I'm sorry but what the hell," adding later, "this is a dumb tweet."

Your definition of loyalty is equivalent to being blackmailed to support something that I disagree with.

Hot Air noted at the time:

It was nearly one year ago when high school student Nick Sandmann and his attorney Lin Wood reached a settlement with CNN in the $275 million defamation case against the network. The exact amount of the settlement was never released but attorney Lin Wood said he was just getting started. Then in July the Washington Post also settled the $250 million defamation suit Sandmann had brought against them. Again the exact amount of the settlement was never revealed and again Lin Wood pointed out there were still more lawsuits to go against CBS, NBC, ABC, the NY Times, Gannett and Rolling Stone.

Wood, who famously represented falsely accused security guard Richard Jewell from allegations of his involvement in the 1996 Centennial Olympic Park bombing, is an ardent supporter of President Donald Trump and insists that the 2020 election was stolen from the former president.

Following the Nov. 3 general election, Wood and fellow Trump-supporting-lawyer Sidney Powell urged Georgians to boycott the Jan. 5 runoff elections in the state over concerns for voter integrity, angering Republicans who lost control of the Senate due to the outcome.

A New Yorker staff writer reported last week that Mercer Law School, Wood's alma mater, is facing pressure to remove Wood's name from its trial court room over his rhetoric and that "Wood says he wants his million dollar gift back if they do."

Over the weekend, Sandmann shared a social media post written by Wood where the attorney wrote, in part:

My alma mater Mercer Law School turned on me. I have suffered politically motivated attacks on my law license and my previously pristine record of professionalism. I have been threatened by others to take efforts to have me jailed and prosecuted for a rhetorical hyperbolic post about Mike Pence. No client had abandoned me but I expect Nicholas Sandmann may do so as he be feeling the pressure from members of [Senate Minority Leader] Mitch McConnell's team on which Nicholas worked this cycle. I have had serious threats of harm and death made against me and my family. My family has abandoned me. But I am not alone. I have We The People who have showered me with messages which inspire me and comfort me. In the end, my efforts have always been for We The People. Until and unless they silence me by imprisonments or death, I will not stop fighting for We The People, for honest elections, for freedom, and for the hundreds of thousands of little children who are being abused, molested, and sacrificed for the demonic pleasures of very evil people in the world - including leaders in our government.