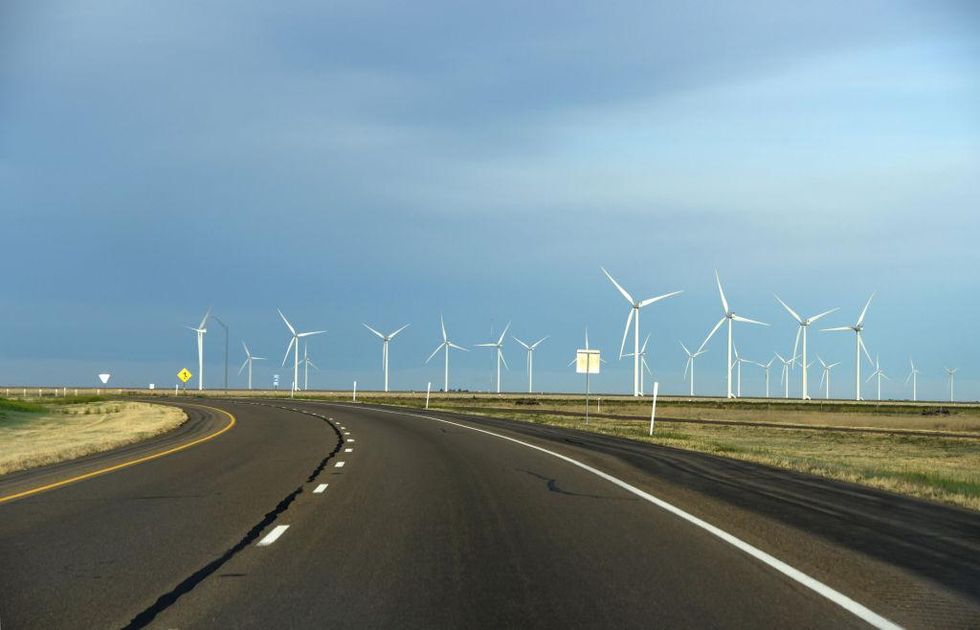 Millions are without power in Texas after a historic winter storm blasted the state over the weekend, creating freezing conditions that have made the roads dangerous and knocking out nearly half of Texas' installed wind power generation.

Texas grid operators who spoke to the Austin American-Statesman said freezing rain and historically low temperatures caused wind turbines in West Texas to freeze to a halt, knocking out some 12,000 megawatts of energy production. Wind farms in Texas typically generate up to 25,100 megawatts of energy, almost half of which is currently out of production as the state works to thaw out the turbines.

"This is a unique winter storm that's more widespread with lots of moisture in West Texas, where there's a lot of times not a lot of moisture," said Dan Woodfin, senior director of system operations for the Electric Reliability Council of Texas, the nonprofit corporation that manages the power grid. "It's certainly more than what we would typically assume."

According to the American-Statesman, wind power is the fastest-growing source of energy in Texas' power grid. In 2013, Texas lawmakers approved a $7 billion plan to subsidize wind energy production. Wind farms now provide 23% of Texas energy and are the second-largest source of energy after natural gas.

Some of the lost wind power in West Texas has been offset by coastal wind farms to the east that are still operational and spinning faster, propelled by storm gusts. But the frozen turbines have contributed to rolling blackouts that have put more than 2.7 million people out of power Monday.

ERCOT reported Monday that electricity demand hit a new winter peak record. In response to the demand, ERCOT asked residents to attempt to reduce their electricity use as much as possible in a news release statement.

"We are experiencing record-breaking electric demand due to the extreme cold temperatures that have gripped Texas," ERCOT President and CEO Bill Magness said. "At the same time, we are dealing with higher-than-normal generation outages due to frozen wind turbines and limited natural gas supplies available to generating units. We are asking Texans to take some simple, safe steps to lower their energy use during this time."

#ERCOT set a new winter peak demand record this evening, reaching 69,150 MW between 6 and 7 p.m. This is more than… https://t.co/toX6VvpKFx

Residents are asked to turn down their thermostats to 68 degrees to conserve energy. ERCOT also recommends turning off and unplugging nonessential lights and appliances, avoiding the use of large appliances like ovens or washing machines, and closing shades and blinds to reduce the amount of heat lost through windows.

Texas Gov. Greg Abbott (R) assured Texans on Monday that the power grid "has not been compromised."

"The ability of some companies that generate the power has been frozen," the governor tweeted. "This includes natural gas & coal generators. They are working to get generation back on line."

The Texas power grid has not been compromised.

The ability of some companies that generate the power has been froz… https://t.co/Ug1QQMAafw

For many people, the loss of power means no heat at a time when temperatures are well below freezing statewide.

The Houston Office of Emergency Management told residents to prepare for power to remain out throughout Monday and Tuesday.

"We are experiencing winter weather for which we have not experienced in decades," the office tweeted.