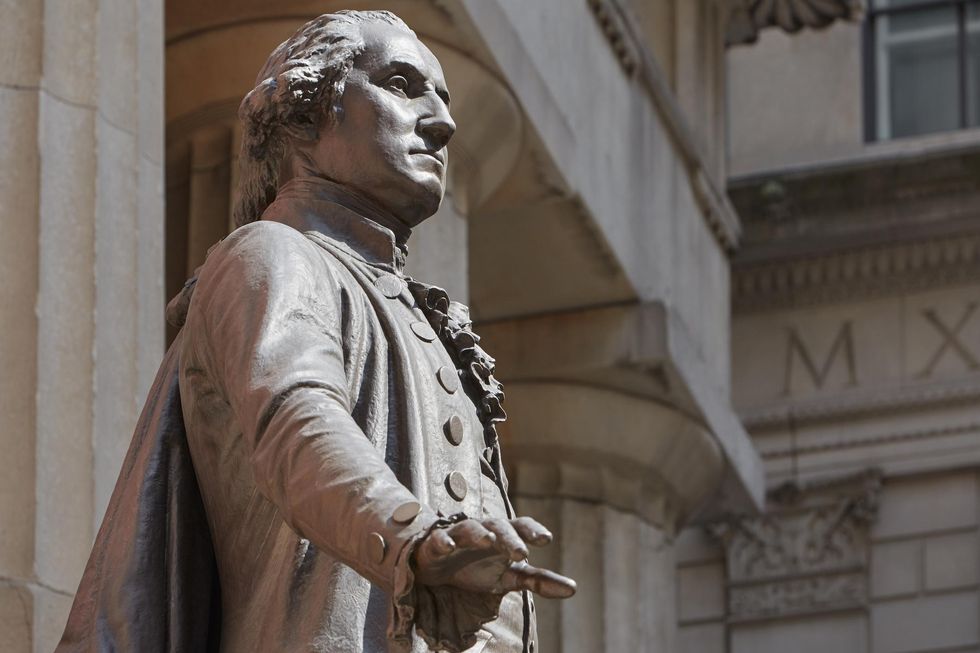 No, we are not celebrating Joe Biden, Barack Obama, Woodrow Wilson, or Millard Fillmore this week. We are supposed to be celebrating George Washington. In other words, we are not celebrating the majestic power of the chief executive of the United States government in the abstract, but the humble leadership of one man who, until recently, successfully set the precedent of the presidency being wielded as an office of limited power rather than the power of a king.

Before George Washington's birthday was hijacked and replaced with a generic "Presidents' Day," Feb. 22 was a day to celebrate the father of our country. According to the Congressional Research Service, George Washington's birthday, to be celebrated on Feb. 22, was first conceived as a federal holiday on Jan. 31, 1879. It wasn't until 1968, when Congress passed the Uniform Monday Holiday Act in order to give government workers even more time off, that the holiday was moved to the third Monday in February. Although the name was never officially changed, having the date of celebration disconnected from Washington's actual birthday has allowed the original purpose of the holiday to become nearly obsolete, like every other meaningful American tradition.

Because Washington refused to become king when he had the opportunity on two occasions, and instead opted to humbly serve his country as its first elected president, the observance of his birthday is really a celebration of our Constitution and the entire republican system of governance upon which our nation depends. In that sense, "Presidents' Day," aka George Washington's birthday, is truly a day to recognize that we are a republic, not a monarchy, when the president can now literally rule over our bodies and criminalize our breathing of free air.

In a revolutionary break from the rest of the 18th-century political world, the newly crafted Constitution vested the president with executive authority to faithfully execute the laws, not craft the laws. When contrasting the power of a king with that of a president, Alexander Hamilton wrote in Federalist #69 that "the one [a president] can confer no privileges whatever; the other [a king] can make denizens of aliens, noblemen of commoners; can erect corporations with all the rights incident to corporate bodies."

How far we have fallen that we now have a president who confers all sorts of privileges, including "making denizens of aliens," the very example of legislative authority Hamilton promised the people of New York would not be vested in the office of chief executive. We now have a president who can use a virus to muzzle the mouths of the citizens, while releasing thousands of foreign invaders into our country with no care for spreading the virus.

Although the power of the presidency was not to have any semblance of the power of the king, our Founders still felt that the faithful execution of the laws was a grave task that should only be vested in one man and in a man of faith. In defending the decision by the Constitutional Convention to vest the executive authority in one man instead of a tribunal, the great James Wilson said the following during debate at the Pennsylvania Ratification Convention:

He cannot act improperly, and hide either his negligence or inattention; he cannot roll upon any other person the weight of his criminality; no appointment can take place without his nomination; and he is responsible for every nomination he makes.

Hamilton in Federalist #70 explained the need for a one-man executive as such:

It is evident from these considerations, that the plurality of the Executive tends to deprive the people of the two greatest securities they can have for the faithful exercise of any delegated power, first, the restraints of public opinion, which lose their efficacy, as well on account of the division of the censure attendant on bad measures among a number, as on account of the uncertainty on whom it ought to fall; and, second, the opportunity of discovering with facility and clearness the misconduct of the persons they trust, in order either to their removal from office or to their actual punishment in cases which admit of it.

However, the Founders never envisioned two problems: the creation of political parties and the decline of religion and virtue among our civil society, two issues Washington ominously warned about in his farewell address.

Political parties have rendered our separation of powers and checks and balances moot. The legislature can no longer properly check a lawless executive because it is most often composed of enough party loyalists who will operate in tandem with the president instead of as a separate body of government. Also, one of the parties, the GOP, refuses to effectively check the ruling class in all bodies of government.

Moreover, we have lost a sense of how important religious virtue is for both the president and the people as a whole. The man we celebrate at this time of year, our very first president, devoted the largest share of his farewell address to the importance of religion and virtue:

Of all the dispositions and habits which lead to political prosperity, religion and morality are indispensable supports. In vain would that man claim the tribute of patriotism, who should labor to subvert these great pillars of human happiness, these firmest props of the duties of men and citizens. The mere politician, equally with the pious man, ought to respect and to cherish them. A volume could not trace all their connections with private and public felicity. Let it simply be asked: Where is the security for property, for reputation, for life, if the sense of religious obligation desert the oaths which are the instruments of investigation in courts of justice? And let us with caution indulge the supposition that morality can be maintained without religion. Whatever may be conceded to the influence of refined education on minds of peculiar structure, reason and experience both forbid us to expect that national morality can prevail in exclusion of religious principle.

When the president no longer believes religion is needed to maintain morality and when much of the society agrees with that view, there is nothing keeping the most powerful man in the country from acting despotically. But thankfully, for all of us, the one president who could have been a king was guided by the religious virtues to place the interests of the republic over his own power or ambition. Nobody expressed the importance of George Washington better than Calvin Coolidge during a 1927 speech honoring our first president:

His was the directing spirit without which there would have been no independence, no Union, no Constitution, and no Republic. His ways were the ways of truth. He built for eternity. His influence grows. His stature increases with the increasing years. In wisdom of action, in purity of character, he stands alone. We cannot yet estimate him. We can only indicate our reverence for him and thank the Divine Providence which sent him to serve and inspire his fellow men.

What shocked the world more than Washington's defeat of the British was that he voluntarily resigned his commission as commander in chief of the Continental Army on Dec. 23, 1783. Rather than become the king of the new country, as had been the custom since the dawn of time upon leading the defeat of one regime, Washington humbly told the Congress, "I retire from the great theatre of action, and bidding an affectionate farewell to this august body, under whose orders I have so long acted, I here offer my commission, and take my leave of all the employments of public life."

King George III, upon hearing about this astonishing act of humility, reportedly told the American-born artist Benjamin West: "If [Washington] does that, he will be the greatest man in the world."

Indeed, he had become the greatest man in the world because he personally ensured that America would become a country of great men where each man would be the king of his own castle and all would work together to create the great experiment of self-government for the greater society.

When Washington was eventually called back for service to chair the Constitutional Convention and become the nation's first president, he could also have become a dictator but declined to do so. His greatness was most evident in his ability to strike the perfect balance in humbly devolving power to the people, while concurrently maintaining a steady hand as the first president, so that the nations of the world, as well as the reluctant states, would respect the power of the newly created government.

Washington perfectly expressed this balance and struck this tone in his state of the union address of 1795. In referring to his firm but merciful quelling of the Whiskey Rebellion the year before (he ultimately pardoned the leaders), Washington wrote to Congress:

For though I shall always think it a sacred duty to exercise with firmness and energy the constitutional powers with which I am vested, yet it appears to me no less consistent with the public good than it is with my personal feelings to mingle in the operations of Government every degree of moderation and tenderness which the national justice, dignity, and safety may permit.

Over 200 years later, we have deviated from self-government in every way imaginable, culminating with the ultimate display of tyrannical executive power this past year with COVID fascism and now with the assault on the First Amendment rights of conservatives. As George Washington said, "If freedom of speech is taken away, then dumb and silent we may be led, like sheep, to the slaughter."

Many of us have wondered how the American people so quickly forgot the importance of their own power and the limitations of executive power in this country. Perhaps the answer is rooted in the fact that we have forgotten the origin of the holiday celebrating the very man who bequeathed us all this power of self-governance.