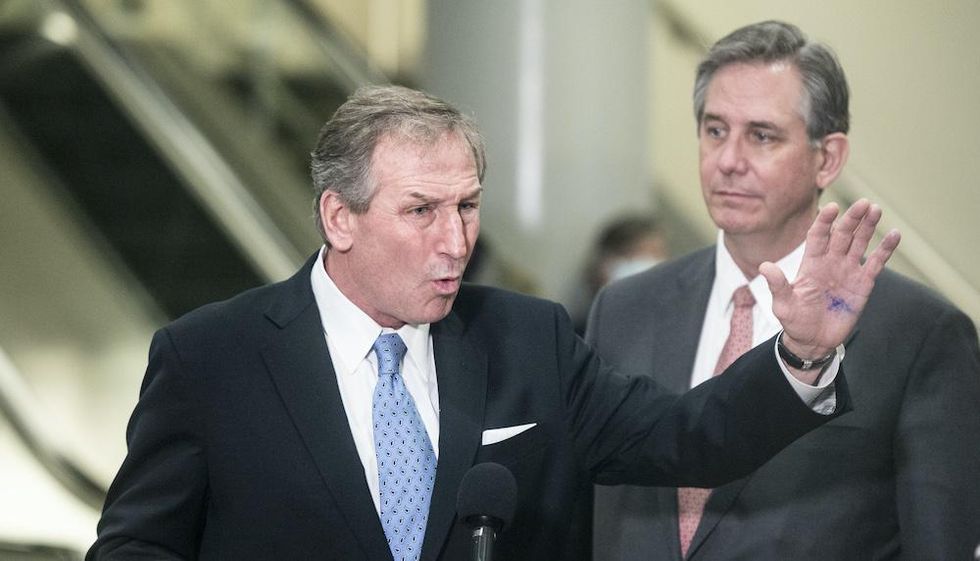 Vandals attacked the home of one of former President Donald Trump's impeachment defense lawyers Friday, according to police.

The Philadelphia Inquirer said that vandals smashed windows and spray-painted "TRAITOR" and an arrow pointing to the house in red on van der Veen's driveway after he spent hours earlier that day presenting Trump's impeachment trial defense on the floor of the U.S. Senate. Van der Veen's wife discovered the vandalism and reported it to the police.

The attorney told Fox News that his home was attacked and that his family, business, and employees are facing threats.

"My home was attacked," van der Veen said Saturday on Fox News. "To answer your question, my entire family, my business, my law firm are under siege right now. I don't really want to go into that, though."

The Inquirer reported that demonstrators with the group Refuse Fascism gathered outside van der Veen's law office chanting, "When van der Veen lies, what do you do? Convict. Convict."

Fox News added that the van der Veens hired private security for their home in the wake of the attack.

Fellow Trump impeachment attorney Bruce Castor reiterated to Fox News that van der Veen's house had been attacked, then revealed that his house, too, had been "the subject of unrest."

"I was a homicide prosector for decades, so I have some experience with death threats and vandalism at my home, and my wife and police dealt with that at our house," Castor said in response to questions about how difficult the trial has been on the defense team. "But the rest of the team don't have that sort of experience."

"It's been very unsettling. Mr. van der Veen's house was vandalized last night," he said, adding, "My house was the subject of unrest."

Castor then warned about the threat of attacking lawyers who are paid to represent people that many people might not like.

"These people are lawyers, and they expect to do their jobs without having fear for their personal safety," he said. "If the country has reached the point where somebody who needs a lawyer, that lawyer is themselves attacked, where are we going to be going forward when somebody truly is in need of counsel and can't find one because they're afraid to defend a person who represents what half the country thinks is an unpopular cause?"

West Whiteland Township Police Department Detective Scott Pezick told ABC News on Sunday that no arrests have been made so far in the attack on van der Veen's home and that there currently are no suspects. He added that police have increased their presence in the attorney's neighborhood.