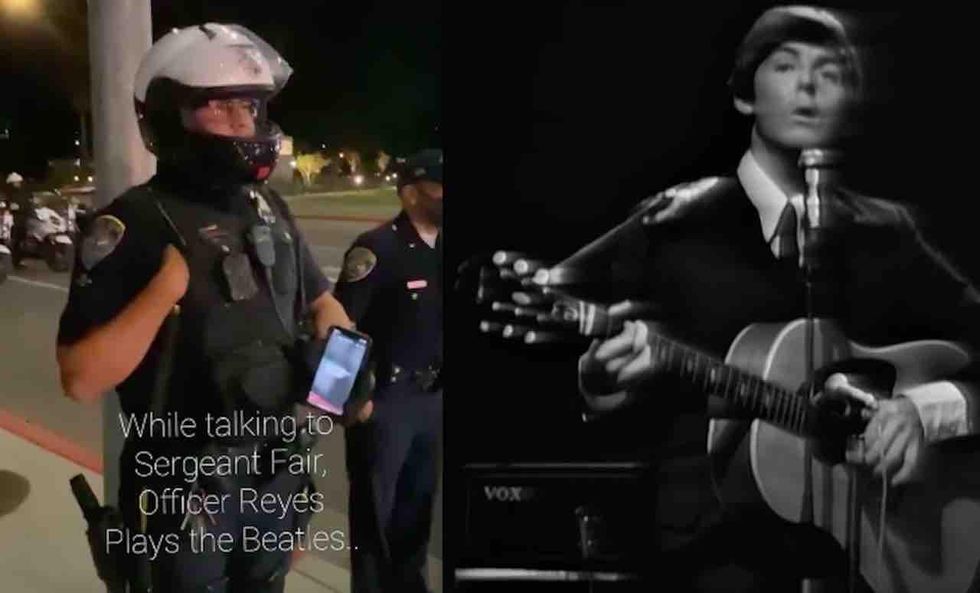 Some Beverly Hills cops are getting back at a left-wing activist who takes videos of them — with a good bit of wit attached to it.

Vice News reported that Los Angeles-area activist Sennett Devermont recorded cellphone video as he was trying to talk to uniformed Beverly Hills police officers on a sidewalk last month — but the chatter was interrupted by a familiar sound.

It was coming from Officer Julian Reyes' cellphone he was holding aloft. It was an acoustic guitar, and a man singing: "Yesterday / all my troubles seemed so far away / now it looks as though they're here to stay / oh, I believe in yesterday."

Yup, it was Paul McCartney singing the Beatles' classic "Yesterday" — arguably one of the most popular songs ever, as it was performed over 7 million times just in the 20th century — and recorded more than 1,600 times.

As you can probably guess, the Beatles rightfully are quite protective of unauthorized uses of their songs, and when they show up in videos, those clips are typically blocked.

According to Devermont, the tactic worked. He noted in his Instagram post of the interaction with police that "it seems they think playing copyrighted and licensed music will keep the word from getting out. And turns out.. they are right! I sent this video to multiple news agencies who covered the story. Most said they can't share it... why??? Because it's playing Beatles music."

Vice News said songs like "Yesterday" showing up in Instagram videos can trigger the platform's algorithmic copyright filters which can result in videos being taken down — and suspension of live streamers' accounts for repeated infractions.

When the latter video began, Vice News said Devermont was talking to Sgt. Billy Fair, who used his cellphone to play "Santeria" by '90s band Sublime when Devermont was trying to talk to him in a separate video — and Devermont was quite frustrated:

This strategy isn't entirely surprising. Nick Simmons and Adam Holland, researchers at Lumen Database, which studies copyright takedowns on social media,
noted last year that music in videos filmed at Black Lives Matter protests had repeatedly resulted in them being removed from social media sites on copyright grounds. They theorized that, while these removals seemed incidental, that copyright could be weaponized by police.

"Law enforcement, or indeed anyone of any ideological persuasion who was seeking to prevent videos of a particular event from being shared online, need only make sure that copyrighted audio is present with sufficiently recognizable clarity and volume in the background of a protest or other event," they wrote. "A chilling prospect indeed."

What did Beverly Hills police have to say?

Beverly Hills police told Vice News in a statement that "the playing of music while accepting a complaint or answering questions is not a procedure that has been recommended by Beverly Hills Police command staff" — and that the videos of Fair were "currently under review."

To mark this sobering development, here's a live version of McCartney playing the melancholy "Yesterday" in 1965 when it was brand new: