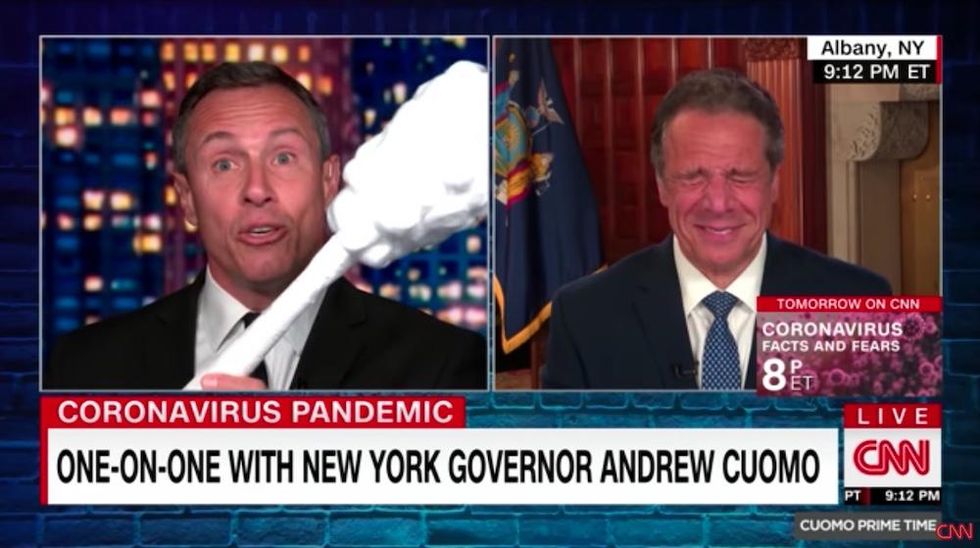 Everyone remembers CNN's Cuomo & Cuomo Happy Time segments during the early months of the coronavirus pandemic.

Host Chris Cuomo got his cable news bosses to waive the company's yearslong rule preventing him from having his brother, New York Democratic Gov. Andrew Cuomo, on "Cuomo Prime Time."

What resulted was lots of free propaganda time for the governor to share his personal views on the pandemic without facing tough questions about how things were going in his state. As the virus spread across the U.S., the governor was on his brother's show at least 10 times, the Washington Post reported.

No one will forget the governor telling his kid brother that his mom made him come on the show.

Or the clever banter and fake outrage when Little Cuomo interrupted Big Cuomo.

And, of course, we'll always have the giant Q-Tip incident.

While Gov. Cuomo was laughing it up on his brother's cable news show, thousands of people were dying in New York nursing homes.

Those deaths are now the subject of a growing scandal surrounding the governor's office as reports have shown that not only did the governor's office order COVID-positive patients into nursing homes, but also that the governor significantly underreported the number of nursing home deaths by thousands of victims — and that his office purposefully hid the data to blunt pressure coming from the federal level and to avoid bad publicity.

Gov. Cuomo attempted Monday to shift the blame during a news conference, but not even his fellow New York Democrats in Albany are buying it.

So, how has his brother Chris covered the scandal on his CNN show?

And that fact stood out to Washington Post media critic Erik Wemple.

In his column Wednesday, Wemple pointed out that on the same day that Cuomo the Governor was attempting to blame everyone else for the newest nursing home scandal-related stories coming from his office, Cuomo the Host was ignoring the news:

On his Monday night CNN program, host Chris Cuomo provided an update on the biggest story of the past year. “Now, good news: When it comes to coronavirus, we've had the best week we've seen so far, in terms of getting people vaccinated. And every week since New Year's, the rate has only improved," said the host.

Here's an update that he skipped: Just hours before “Cuomo Prime Time" aired, New York Gov. Andrew Cuomo held a news conference to address his state's nursing-home scandal. Under his leadership, the state has shown a staggering lack of transparency regarding the extent of coronavirus-related deaths in New York nursing homes. ...

That story — the hottest on the covid beat on Monday — didn't make the cut on “Cuomo Prime Time." Perhaps that shouldn't be a surprise: Chris Cuomo and Andrew Cuomo are brothers, and journalists can't reliably cover their brothers.

That familial relationship would be a good explanation for Chris' decision to ignore the latest Andrew news, Wemple said, if it weren't for the fact that he had covered the governor's pandemic reaction repeatedly in what became a two-man routine that drew kudos "from all over entertainment media."

Chris himself pointed out that the brother-and-brother "news" segments were an unusual break from the ethics of the journalism industry and even admitted that he could not be objective about the governor's efforts.

Not objective but true,the facts tell the story.NY had & has its struggles but they're doing way better than what w… https://t.co/avNNDXvdru

"Me having you on the show is an unusual thing. We've never really done it. But this was an unusual time," Chris told his brother. "I'm wowed by what you did. And, more importantly, I'm wowed by how you did it."

Yet, in these unusual times — including now, when the governor is accused of underreporting and then hiding thousands of nursing home deaths that were a result of his orders and then trying to shift the blame — Chris Cuomo can't be bothered to address what's going on in Albany, Wemple noted.

Cuomo's CNN program "brands itself as a locus of chest-beating integrity and righteousness," Wemple pointed out, but its coverage of the governor has been "asymmetrical" — "over-the-top praise when the governor is up; silence when he's down."

Wemple asked CNN about the discrepancy and received what most critics of the network would consider an unsurprising, hypocritical response:

The early months of the pandemic crisis were an extraordinary time. We felt that Chris speaking with his brother about the challenges of what millions of American families were struggling with was of significant human interest. As a result, we made an exception to a rule that we have had in place since 2013 which prevents Chris from interviewing and covering his brother, and that rule remains in place today. CNN has covered the news surrounding Governor Cuomo extensively.

Wemple noted that the statement is an example of the problem at CNN: "You can't nullify a rule when your star anchor's brother is flying high, only to invoke it during times of scandal. You just can't."