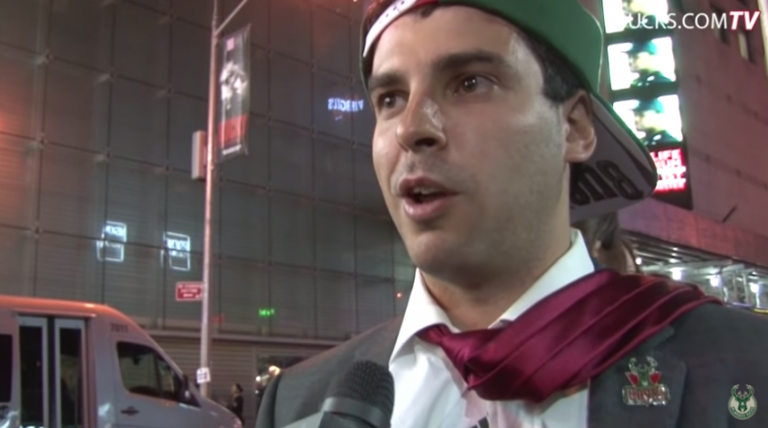 Alex Lasry, the 33-year-old son of a billionaire Democratic megadonor with alleged Russian mob ties, launched a Senate campaign in Wisconsin on Wednesday.

"We need a new way of thinking and a new perspective," the wealthy Milwaukee Bucks executive said in his announcement video. Lasry is running to succeed Republican senator Ron Johnson, who has not revealed whether he will run for reelection.

Lasry, who pledged to "invest" personal funds into the campaign, has long used his family's deep pockets to rub elbows with top party officials. He worked in the Obama White House in 2012 as his father—billionaire hedge fund manager Marc Lasry—bundled nearly $1 million to the Democrat's campaign. Lasry's father also hosted lucrative fundraisers for failed presidential candidate Hillary Clinton and employed Chelsea Clinton at his hedge fund.

The junior Lasry joined the Bucks as a chief executive in 2014 after his father purchased the team. He raised $11 million to steer the Democratic National Convention to Milwaukee five years later, earning praise from then-chairman Tom Perez. Lasry and his father went on to serve as top campaign bundlers for President Joe Biden in 2020, and the pair have combined to give nearly $1.3 million to party officials since the 1990s.

Lasry's Senate bid, however, does not come without controversy. His father in 2013 withdrew his nomination as Obama's ambassador to France after an FBI probe tied him to a Russian mob-run poker ring. The shady ties may have spooked Lasry, who said in a 2014 interview that he could "calm down, breathe deeply, and know my dad wasn't going to kill me in my sleep" after the Bucks scored a number-two pick in the NBA's draft lottery. The elder Lasry also had a close friendship with convicted sexual predator Harvey Weinstein. He resigned from the board of Weinstein's film company in 2017 but denied any knowledge of the Hollywood executive's criminal behavior.

Lasry also faced criticism when he hopped Wisconsin's coronavirus vaccine line in January. The Democrat received the shot through an uncle-in-law despite the state limiting the vaccine to residents over the age of 65. Lasry asserted that his vaccination was "pure happenstance."

Republicans immediately attacked Lasry on Wednesday afternoon, signaling that his wealth will be a target during the campaign.

"Wisconsin doesn’t need a spoiled rich kid like Alex Lasry who thinks it’s okay to use his wealth and power to cut in line ahead of vulnerable, elderly Wisconsinites to receive the COVID-19 vaccine," the National Republican Senatorial Committee said in a statement on his campaign launch.

Lasry is the second Democrat to enter the race after Outagamie County executive Tom Nelson launched his campaign in October. The seat is considered a top priority for national Democrats looking to expand their razor-thin Senate majority, especially if Johnson decides to retire. Other rumored candidates from the state include Reps. Ron Kind and Mark Pocan, lieutenant governor Mandela Barnes, and attorney general Josh Kaul.