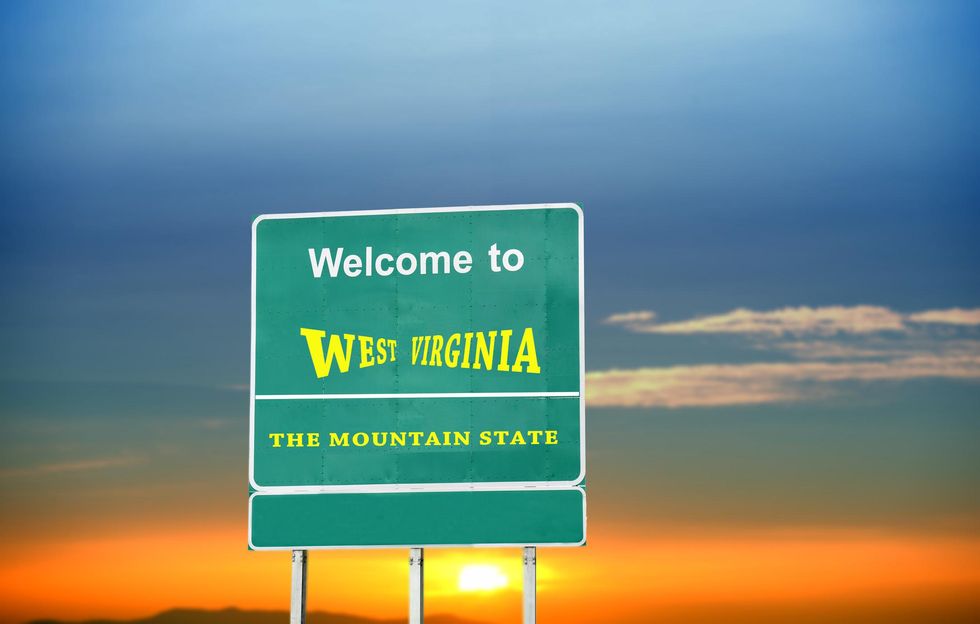 Thomas Jefferson regarded urban areas as "as pestilential to the morals, the health and the liberties of man" and looked to rural America for "more health, virtue and freedom." Under his vision, one would expect no greater beacon of freedom than the official Mountain State of West Virginia, but the perfidious Republican Party has managed to turn one of the most rural parts of the country into the tyranny of San Francisco — with masks, child abuse in school, and closure of struggling businesses.

Living in Maryland during this period of totalitarian COVID fascism, just a short drive from West Virginia's panhandle, I found myself longingly casting my gaze westward to settle in what appeared to be a nice red state. "West Virginia, mountain mama, take me home, country roads." After all, every elected state official is a Republican, no Democrat has carried a single county in a presidential election since 2008, and Republicans control the Senate 23-11 and the House 77-23.

Then, my bubble was burst last September when a listener of my podcast informed me that West Virginia has the same diabolical mask mandate, criminalization of businesses, and abuse of children at school as Maryland does. In fact, Gov. Jim Justice even used Cuomo's line about "if a mask just saves one life …" He believes one human being breathing normally is risking another person's life. That is perhaps the most diabolical thing a politician can say.

Well, Governor, Cuomo quite literally has not saved even one life!

West Virginia’s mask mandate is a fun one to look at.

It came while cases were very low, only 45 per million. Nat… https://t.co/z5HgUEDd1s

Just how out of touch are elected Republicans with their voters? The listener, who just recently moved to Putnam County, West Virginia, from Virginia for freedom, told me that her children in this Trump+43 county are forced to wear masks for 7 hours straight, including during PE and recess. Another listener from Boone County, which Trump carried by 53 points, informed me that businesses are being forced to inform on each other and are eventually charged with misdemeanors by the health department. The health department of this Trump+53 county has put into place a "three strikes and you're out" system for businesses caught not enforcing the mask mandate. A number of counties in the northern part of the state still don't have full in-person instruction.

One of the first acts of Speaker Roger Hanshaw in the first legislative session since Justice's tyranny, rather than countermanding the governor's inhumane, illogical, and illegal orders, was to order mask-wearing (HR 5) on the floor of the West Virginia legislature, just like in California.

A bipartisan group of legislators are pushing a bill (HB 2003) to limit emergency declarations to 60 days, a very generous period of time without legislative input. Yet Jim Justice still thinks that is infringing upon his monarchical powers. "I'm going to go back to something my dad taught me a long, long time ago, and said, 'If it's working, don't fix it.' The bottom line is, it's worked," said Justice. "And it's not only worked, it's worked unbelievable."

Take a look at the curve, which shows that the masks did nothing, and the state had the same late fall/early winter curve as every other place on the face of the planet.

He did such a good job with his lockdown policies that … they coincidentally happened to follow the same natural curve as neighboring states with a similar climate.

This man is taking the starting point and the end point of the virus, all the while forgetting that the cases went up 1,800% long after all of his insanity was in place and only went down afterwards once the seasonal spread was over, as was the case in every single state and every country around the world! Some maskers suggest that mask mandates only work if they were in place early when cases were low. Well, that is exactly what happened in West Virginia!

The West Virginia legislature is in its second week in session. Conservatives are asleep at the wheel. Republicans have a 2-1 majority in the Senate and a 3.5-1 majority in the House, and incidentally, they only need 51% to override the governor's veto. This should be an easy time to either force these Republicans to become Republicans or expose them in front of their voters as the closet Democrats they really are. The governor himself only switched parties once he realized how much his state loved Trump.

On Saturday, the House Judiciary Committee originally accepted an amendment to HB 2003 by Delegate Pat McGeehan, R-Hancock, to clarify that the 60-day limitation the legislature wants to place on emergency declarations applies "to any state of emergency or state of preparedness currently in effect." But then on Monday, the committee reversed course and stripped it out! Ironically, it was Democrat lawmakers who cried foul about this former Democrat-turned-RINO governor becoming a king. "[The bill] made somebody upset in the executive office, the old king himself," said House Minority Whip Shawn Fluharty in response to the second vote. "So we came back in here, and we're reneging on promises made to our constituents."

How is it that in a state Trump carried by a margin of 68%-29%, conservatives can't even pressure 51% of a 3.5-1 majority to oppose this governor who is indistinguishable from Gavin Newsom in California? Well, because the chairman of the House Judiciary Committee is none other than Moore Capito, the son of the very liberal U.S. Senator Shelly Moore Capito. He used the fact that the committee room needed to be cleaned for the virus to host the next committee as a means of moving on from debate. "We're in the middle of an unforeseen and very, very novel and dangerous pandemic right now," said Del. Moore Capito in defending his rush to pass the bill without teeth. "I think it's important that we move forward with the bill the way it's drafted."

Again, who needs Democrats when we have Republican leaders just as passionately promoting the illogical premises behind their most destructive and unconstitutional policies?

This is why conservatives need to shift their focus from national politics to state and local politics while building a patriot infrastructure at the county level to hold phony Republicans accountable. Unless we get organized in red states to make them red again, Jefferson will roll over in the grave watching rural states adopt the same pestilence to the morals, the health, and the liberties of man as the large cities.