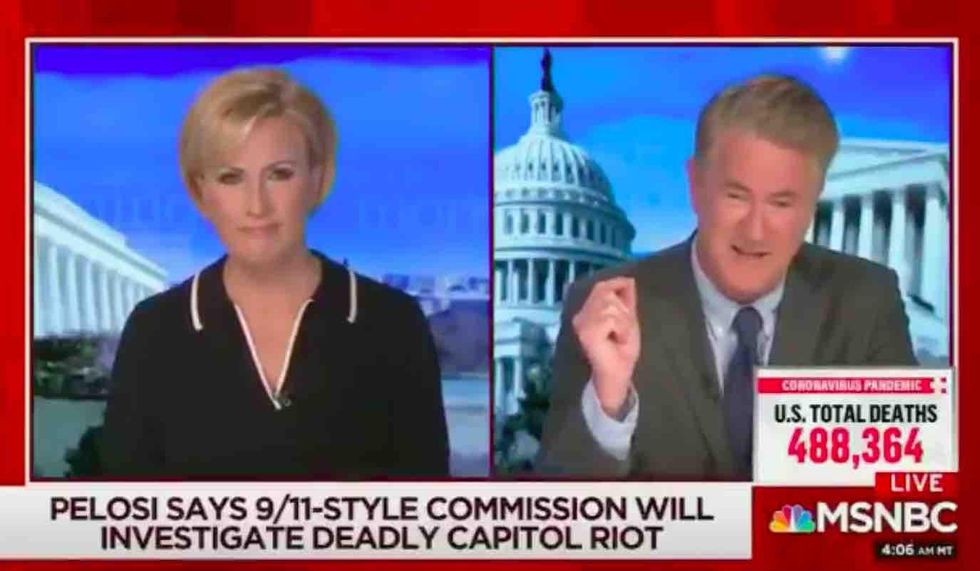 Immediately following last month's Capitol riot in Washington, D.C., a major point of contention among conservatives has been that leftists far and wide decried the "insurrection" of Jan. 6 while ignoring — or even justifying — the months and months of violence and destruction from Black Lives Matter and Antifa that took place across America last year.

And MSNBC's Joe Scarborough let his position be known during Tuesday's edition of "Morning Joe."

Addressing the "idiots on other cable news channels" who say the crime of "mom and pop" stores "vandalized during the summer riots" is "just as bad as the United States Capitol being vandalized," Scarborough threw down: "No, jackass, it's not."

"The Capitol of the United States of America is the center of American democracy," he continued. "And while I'm a fierce believer in people's right to defend their private property, I'm not going to confuse a taco stand with the United States Capitol. I'm not going to confuse the selling of tacos with actually moving through a constitutional process."

MSNBC's Joe Scarborough says that local businesses being vandalized in antifa/BLM riots over the summer is not equa… https://t.co/8JjTbyjo4s

What else did Joe say?

Scarborough apparently caught wind of the Daily Caller's later tweet and let them have it.

"Do you think it is the same?" he tweeted in response. "Are you too stupid to understand the destruction of personal property is abhorrent, and at the same time realize that a terrorist attack against the US Capitol is a greater threat to America? Is arson against a warehouse the same as 9/11?"

The Daily Caller followed up its initial tweet with another clip showing a man speaking in front of his destroyed store last summer:

Was Scott Carpenter’s furniture store which was burned down during the riot in Kenosha just a taco stand @JoeNBC?
https://t.co/s9FxtD9Fmh

"Was Scott Carpenter's furniture store which was burned down during the riot in Kenosha just a taco stand @JoeNBC?" the Daily Caller asked.

But Scarborough hit right back: "No jackass. It was a furniture store. And the freaks who burned it down should rot in jail until they pay him back."

Richie McGinniss, the Daily Caller's chief video director, tweeted that "the *federal courthouse in Portland was attacked for over 100 days straight. I was at the Capitol, and I was in Portland. Both were abhorrent because they were both examples of POLITICAL violence. For Joe, the Capitol riot was Trump supporters, and that's the *real difference."

Again Scarborough defended himself: "You are being ignorant. I have attacked rioters in Portland since the summer. I have specifically blasted Portland's mayor and Oregon's governor repeatedly for letting rioters trash the federal courthouse and destroy the city. Can you do the same to the Trump Terrorists?"

You are being ignorant. I have attacked rioters in Portland since the summer. I have specifically blasted Portland’… https://t.co/Lk5rEvEcMH

The Daily Caller didn't let up, offering up a pair of videos that underscored its case:

And then bring on Roderick Reynolds, Detroit father of five who had his home burned down during the riots, so you c… https://t.co/6dr1yPuDuS