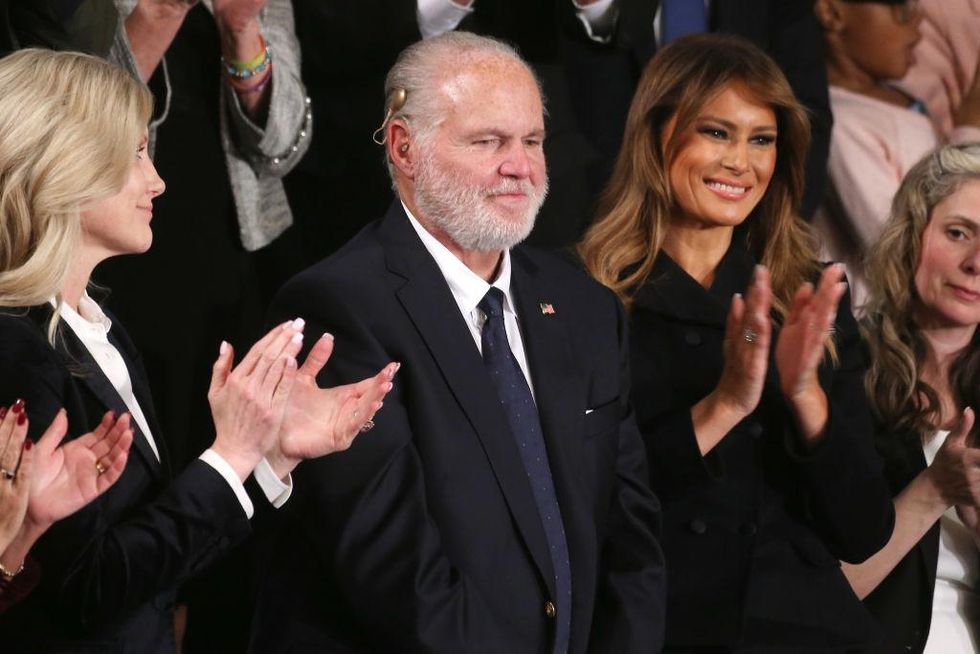 Rush Limbaugh, the founding father of conservative talk radio, died Wednesday after losing his battle with stage 4 lung cancer. He was 70. His wife, Kathryn, made the tragic announcement on his radio show, which was dedicated to celebrating his legacy.

Immediately following the news of Limbaugh's passing, conservatives who were inspired, entertained, and educated by his radio program, many of whom would not have their careers were it not for the trail he blazed, offered their tributes to the uncontested greatest conservative radio host of all time.

BlazeTV host and conservative radio host Mark Levin eulogized Limbaugh on Fox News, remarking that he made it "cool to be a patriot."

Levin, who at the beginning of his radio career was a frequent guest on Limbaugh's radio program and was a close friend, said, "We lost a tremendous patriot."

"I've known Rush for 25 years. I want your audience to know how much he profoundly loved them," he told Fox News host Harris Faulkner. "An incredibly wise man, a very, very smart man. A dear person. If you thought somebody needed help, he would help them. Nothing like what the liberal media has tried to do to him."

Radio and Fox News host Sean Hannity also called in to Fox News, acknowledging that "there's no Fox News or even some of these other opinionated cable networks" without Rush Limbaugh.

"There is no talk radio as we know it without Rush Limbaugh... There's no Fox News or even some of these other opin… https://t.co/3mhh4OmiNy

Other stars in conservative media shared similar feelings about Limbaugh.

"No words ... I just got news the Rush Limbaugh has passed away. Thanks Rush for all you taught, gave and were," said BlazeTV host Glenn Beck. "A hero to many. An icon. A patriot. A revolutionary that saved radio. Heaven's gain, our loss."

"No conservative would have a voice on ANY platform today if not for Rush Limbaugh," said BlazeTV host Steven Crowder. "The world is a sadder place with him not in it."

"None of us, NONE OF US, would exist in conservative media without his success," said BlazeTV host Steve Deace. "We all owe him a massive debt of gratitude. He leaves behind an unmatched legacy. Prayers to my friend @DavidLimbaugh for his loss."

"RIP. More than any single person, Rush Limbaugh helped break the left's monopoly in the media," observed Fox News senior political analyst Brit Hume. "The left is still dominant, but not to the extent it was before he came along. He waged a brave struggle against deafness and later, the cancer that killed him. He was a giant."

"The legacy of Rush Limbaugh is clear: the most successful radio broadcaster in history," said former Fox News host Bill O'Reilly. "Mr. Limbaugh provided a conservative balance against the dangerous left wing corporate media machine. History counts few entertainers among those who made a difference in the country. Rush Limbaugh did."

"Rush Limbaugh had unrelenting boldness to proclaim the truth. Watching his wit, passion, and willingness to hold the media accountable informed my entire career," former White House press secretary Kayleigh McEnany said in a tweet thread offering a longer tribute to Limbaugh. "Growing up in Plant City, Florida, my dad would always play the Rush Limbaugh program in his pick-up truck. My fellow classmates from my all girls Catholic school knew if they [rode] in my car, we would be listening to Rush Limbaugh.

"I am the definition of a 'Rush Baby,' and it's not just me. There are tens of thousands of us all across the conservative movement. He has built a legacy that will endure for many generations to come and will continue to inform our country.

"Thank you, Rush, for all you have done for this nation. The United States of America is better because of you," McEnany concluded.

Several Republican politicians, including two former presidents, expressed their admiration for Rush and their condolences for his family.

"He was a fantastic man, a fantastic talent. People, whether they loved or hated him, respected him," said former President Donald Trump on Fox News Wednesday.

"Laura and I are sorry to learn that Rush Limbaugh has passed away," former President George W. Bush said in a statement. "A son of Cape Girardeau, Missouri, Rush rose as a pioneer of talk radio starting in the 1980s, and was a friend throughout my Presidency. While he was brash, at times controversial, and always opinionated, he spoke his mind as a voice for millions of Americans and approached each day with gusto."

"Rush was a voice for forgotten Americans long before the internet gave us a voice. His was a voice that helped shape our thinking; but more than that, it reminded us to stay the course. I am saddened that I will never hear that voice again," said Rep. Chip Roy (R-Texas).

"He was, like all of us, imperfect; but he was unapologetic and unafraid to advance the cause of freedom and limited government. He stood strong when so many others turned tail and ran away from the fight. He leaves behind an army of freedom-loving Americans who are more-ready and better-prepared to defend this great Republic as a direct result of his life's work."

"A proud son of Missouri, Rush Limbaugh was a voice for the voiceless," said Sen. Josh Hawley (R-Mo.). "He changed talk radio, but more importantly, Rush changed the conversation to speak up for the forgotten, and challenge the establishment. He lived the First Amendment and told hard truths."

"Rush Limbaugh was a giant," said Sen. Tom Cotton (R-Ark.). "With his straightforward, simple articulation of conservatism, he inspired millions. He was one-of-a-kind and he will be missed."

"Rush Limbaugh was an inspiring and important voice for the conservative movement. He will be missed dearly. My sincere condolences to the Limbaugh family," said Sen. Marsha Blackburn (R-Tenn.).

Rush Limbaugh was the best and will perpetually be the gold standard by which everyone else in talk radio is measured.

There's a public caricature of Rush Limbaugh that exists formed by those jealous of his success and contemptuous of his views. Then there is the Rush Limbaugh — a friend, a mentor, and now the man who gets to personally deliver back his talent to the God of all [creation] who, yes, Rush knew, loved, and served.

Rush Limbaugh's radio show drew an estimated 43 million listeners over its three-hour runtime. Many, many more people who listened to Limbaugh regularly or were impacted by his work offered their own tributes to Rush, too many to report.

Throughout his life, and here at the end, Rush Limbaugh was loved. And he is missed.