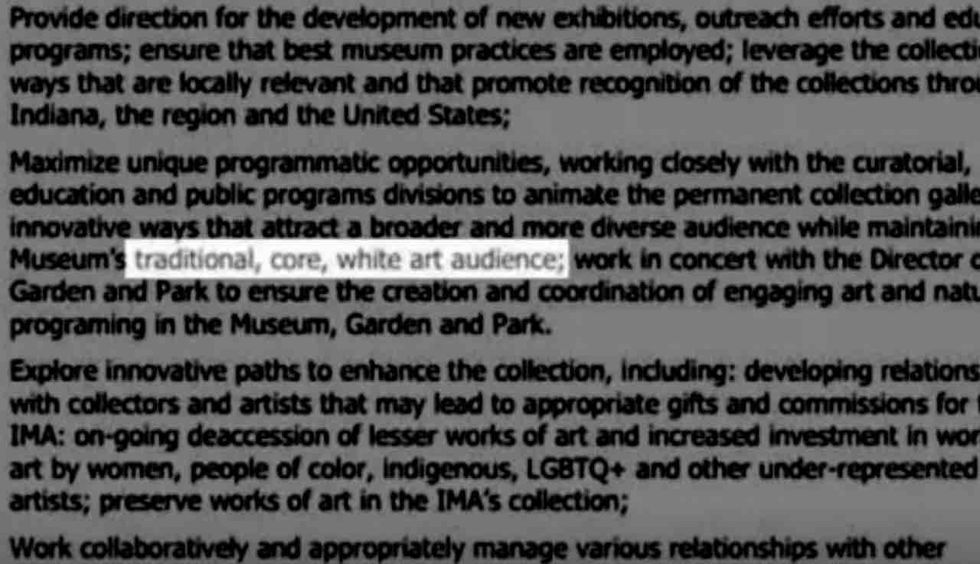 An Indianapolis art museum announced Wednesday that its president was stepping down amid outrage over a museum director job posting that listed one duty as finding "innovative ways that attract a broader and more diverse audience while maintaining the Museum's traditional, core, white art audience,"
WTHR-TV reported.

Newfields — which dubs itself as "a place for nature & the arts" — released a Saturday statement after fallout over the job posting saying it "deeply regrets" the "divisive rather than inclusive" wording, the station said in a previous story.

WTHR said the job posting was first shared by a New York Times reporter and then widely criticized. The station added that Newfields used a recruiting platform called "m/Oppenheim Executive Search" in November.

"I think the fact you can read that one sentence and now reading it as a single sentence or a clause, I certainly can understand and regret that it could be taken that way," Newfields CEO and President Charles Venable told the IndyStar on Saturday. "It certainly was not the intent at all."

The paper added that "white" was deleted from the job posting between Friday night and Saturday morning and the edited description read "innovative ways to welcome and embrace a more diverse audience while maintaining the Museum's traditional core art audience."

But on Tuesday, 85 Newfields staff members and stakeholders signed an open letter calling for Venable's ouster, WTHR further reported. "We do not see a way forward if Dr. Charles Venable remains at the helm of our institution," the letter stated, according to the station.

On Wednesday, Newfields issued a statement announcing Venable's resignation and a "pledge to do better."

"We are sorry. We have made mistakes. We have let you down," the statement began. "We are ashamed of Newfields' leadership and of ourselves. We have ignored, excluded, and disappointed members of our community and staff. We pledge to do better. For those expressing outrage and frustration—we are listening."

The statement then listed action steps the museum said it would take.

IndyStar reported that a Newfields curator resigned last summer for related reasons and said the museum is toxic and fails people of color.

Kelli Morgan worked at Newfields for 2 1/2 years and studied racism in museums with a specialty in African American art, the paper said, adding that she's now an independent curator and art adviser.

"It's a symptom of a much, much deeper issue," Morgan told IndyStar. "What happened to me is nothing compared to what is happening to so many museum professionals and curators across the country."