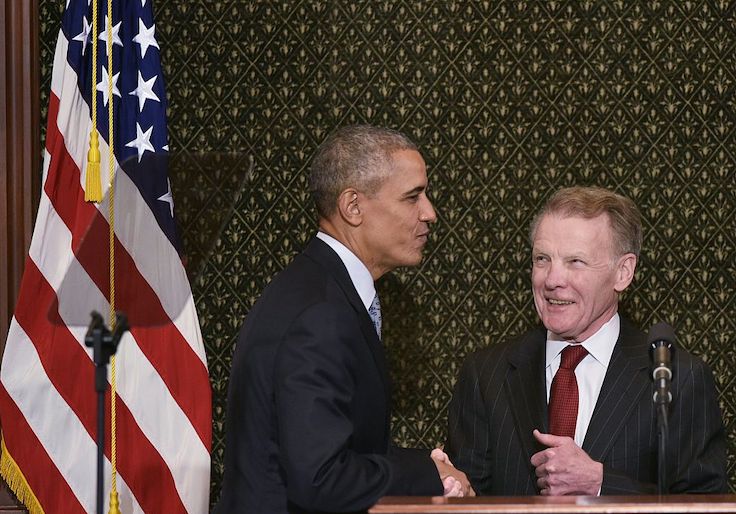 Madigan, who spent over half a century in the Illinois legislature, was implicated in a federal investigation into high-ranking state Democrats' ties with Commonwealth Edison, Illinois's largest utility provider. The utility giant allegedly gave perks worth $1.32 million in exchange for Madigan's rubber stamp on bills in the state legislature, according to federal investigators. He lost his position as speaker in January after failing to secure crucial backing from his Democratic colleagues.

Madigan associate Michael McClain and ComEd CEO Anne Pramaggiore were among those charged in November for their involvement in the scheme. McClain served alongside Madigan in the state house in the 1970s and '80s before leaving public service to lobby for ComEd.

Despite the ongoing investigation, Madigan retains his position as chairman of the state's Democratic Party as of Thursday morning.

He has not yet faced criminal charges.

In a statement upon his departure, Madigan said he was proud of his efforts to work with the private sector.

"Collaborating with leaders in the retail, hospitality, manufacturing, health care, and other industries, we built a partnership with job creators to encourage economic development and address crises in our unemployment insurance and workers' compensation systems," Madigan said.

Madigan suspended his reelection campaign for the speakership after he failed to secure the necessary votes from his Democratic colleagues in a party vote last month. He was first elected to the Illinois House of Representatives in 1971 and, other than two years of Republican control, served as speaker since 1983.

Governor J.B. Pritzker, a close ally of Madigan, faces an investigation over a scheme in which he removed toilets from his mansion so that the building would be deemed uninhabitable, letting him earn a $331,000 property tax break.