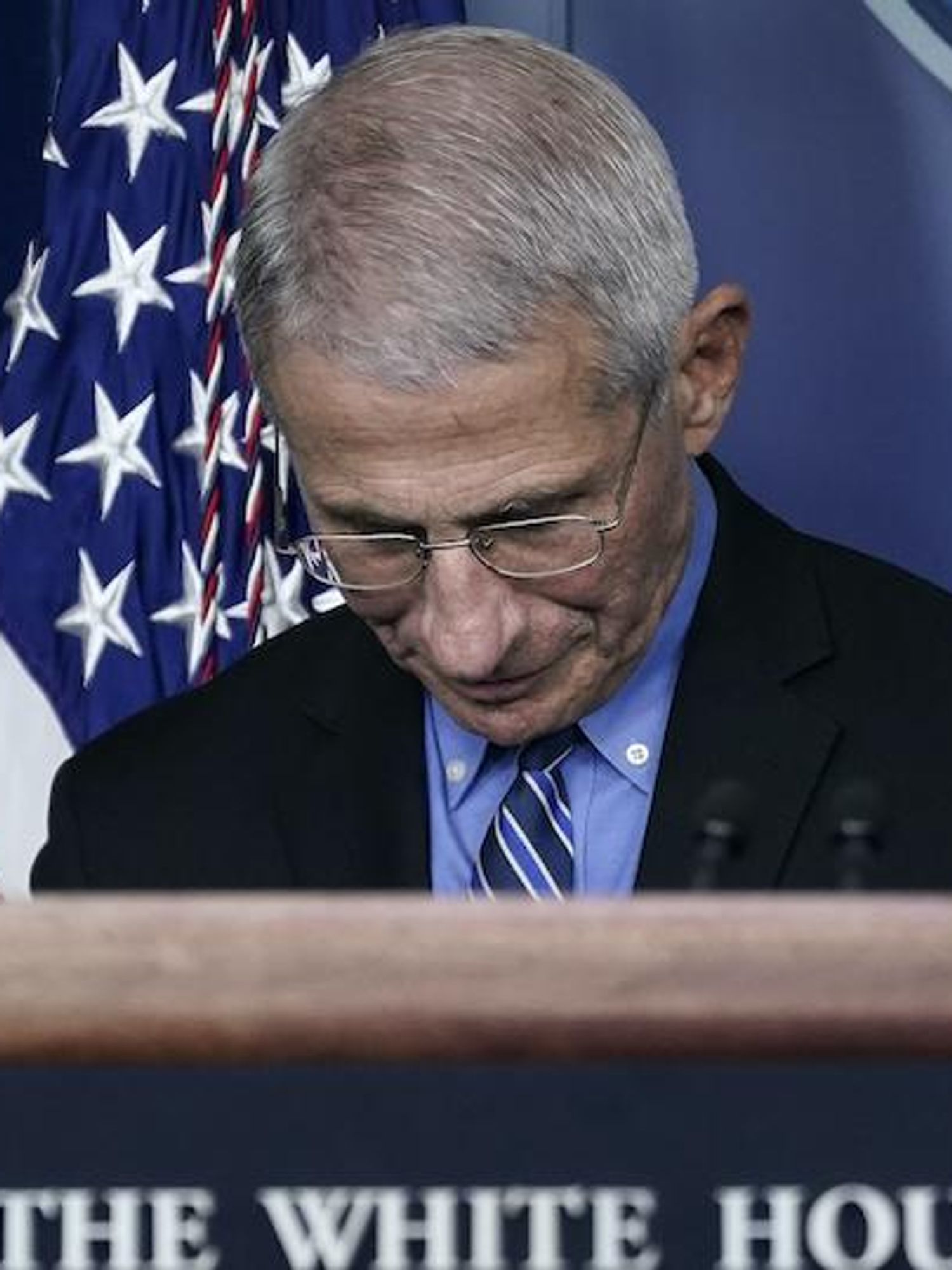 With Joe Biden safely inaugurated, Anthony Fauci found the earliest opportunity he could to troll his old boss, Donald Trump.

"The idea that you can get up here and … let the science speak, it is somewhat of a liberating feeling," Fauci said.

Because "liberated" isn't how Fauci seemed when asked to comment earlier this week on New York Gov. Andrew Cuomo's increasingly obvious culpability in sentencing thousands of nursing home and long-term care residents to their deaths during the COVID-19 crisis' early days and then repeatedly lying about it.

Cuomo aide Melissa DeRosa finally flat-out admitted to state lawmakers this month — almost a year after Cuomo's mistakes needlessly began to fill body bags — that data on the number of deaths in such facilities was purposely underreported by more than 6,000 people in order to minimize potential fallout in the press.

So go ahead, Dr. Fauci. By all means, liberate the science for all of us plebes.

"I can't," Fauci said. "I mean, I'm sorry. I'm really — I'm honestly not trying to evade your question, but I'm not really sure of all the details of that, and I think if I make a statement, it probably could either be incorrect or taken out of context. So, I prefer not to comment on that."

To paraphrase the great philosopher Inigo Montoya, I don't think "liberate" means what Fauci thinks it means. He seems to be confusing it with "deception." Or "cowardice." Or "douchebag."

I also don't think a man who is up to his eyeballs in funding research in Wuhan, China, itself — the very birthplace of COVID-19 — can get away with saying he doesn't have a clue what is going on in his own home state as it was ravaged as hard by a virus as any other place on earth.

Furthermore, among Cuomo's defenses for his state's nursing home disaster in 2020 was that he was merely following federal guidelines. Now how would a guy like Cuomo, who seems aggressively prone to doing whatever he wants whenever he wants to, suddenly feel it would be a compelling narrative to play the victim card?

Maybe because Fauci, who has ultimately ended up on both sides of nearly every major COVID-related policy discussion since February 2020, very publicly came to Cuomo's defense in July by insisting New York "did it correctly" when it came to battling COVID-19.

It was such a successful endorsement by Fauci in the eyes of those who have birthed a cult around him that when December came along, Cuomo and Fauci were invited by the press to ham it up together and appoint themselves the "modern-day De Niro and Pacino" of virus fighters.

Back in May, Gov. Cuomo's brother, CNN host Chris Cuomo, received daily phone calls from Fauci after he supposedly contracted COVID-19, then proceeded to hack the light fantastic from his televised basement during his quarantine. The calls were the kind of thing you do, Fauci said, when you've known the Cuomos since Chris "was almost a kid."

So with all of this connective tissue, is the 80-year-old Fauci really going to get away with a version of "I'm old and don't remember things so well, can I have a blanket and some warm soup, please?" while still being the most highly paid official in the federal government?

What absurdity will finally help you understand that if Cuomo is guilty, Fauci was always driving the getaway car? Because when Cuomo published a book in the middle of the pandemic subtitled "Leadership Lessons," Fauci didn't immediately diagnose the governor's tall tale as even more ridiculous than the doctor's first pitch at the Mets game.

Nor did Fauci take umbrage with Cuomo winning an actual Emmy for his daily propaganda briefings, but he did throw a hissy fit when then-President Trump ran a campaign ad featuring Fauci's own words — "I can't imagine that anybody could be doing more" — about the performance of the Trump administration's White House coronavirus task force.

"In my nearly five decades of public service, I have never publicly endorsed any political candidate," Fauci complained. "The comments attributed to me without my permission in the GOP campaign ad were taken out of context."

Let's check the Fauci scoreboard, shall we? Letting Cuomo wash the blood from his hands 1, admitting Trump wasn't actually Hitler 0.

The bottom line is that Fauci isn't so much an "expert" at picking fights with the virus he is charged with defeating as he is with ambushing those like Rand Paul who aren't interested in tyrannically rubbing out life, liberty, and the pursuit of happiness. Which is why he and Cuomo get along so well.

This week's latest depravity concerning Cuomo is that he called New York State Assemblyman Ron Kim — a fellow Democrat whose uncle is believed to have died from COVID-19 in a New York nursing home — to threaten Kim's career for publicly criticizing him.

"He tried to pressure me to issue a statement, and it was a very traumatizing experience," Kim said, adding that Cuomo told him that "we're in this business together and we don't cross certain lines and he said I hadn't seen his wrath and that he can destroy me."

To which Fauci can be imagined responding at this point: "Need any help?"