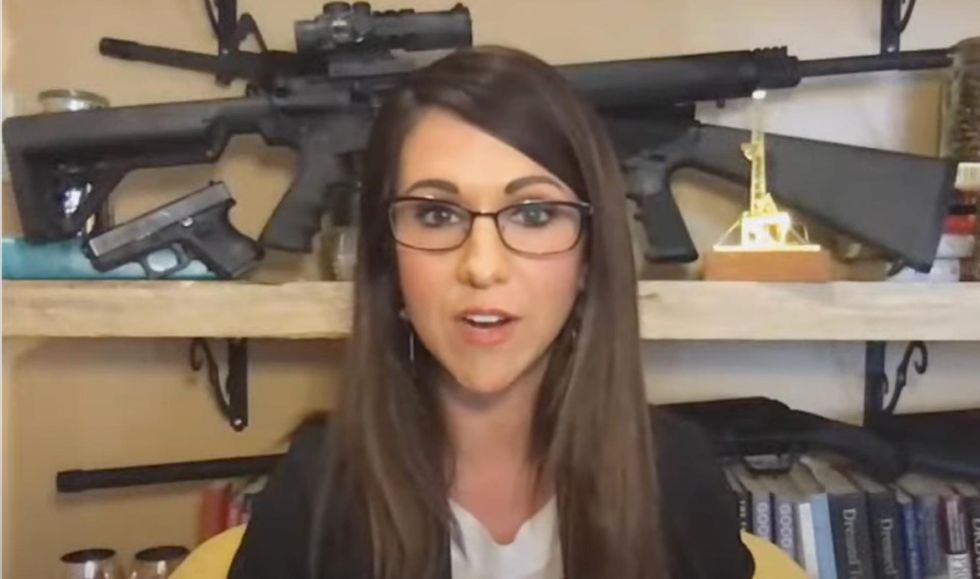 Rep. Lauren Boebert (R-Colo.) is hitting out at critics who mocked her for her Zoom conference background.

Boebert virtually appeared at a House Natural Resources Committee meeting on Thursday, where she was seen sitting in front of a display of guns on a bookshelf in her home.

According to Business Insider, critics mocked the freshman lawmaker for what they said was the guns' "unsafe" storage, but she fought back, stating, "These are ready for use."

"This rule is absurd and discriminative," she said during the Zoom call. "This is a blatant violation of our constitutional rights."

"I would like to request at this time personal security detail that the chairman pays for himself, for every time I'm stepping into the committee room," she said. "If this is passed, the chairman is trying to take responsibility for my personal safety while stripping away my Second Amendment rights."

The outlet reported, "Per a 1967 regulation, Congress members are allowed to keep guns in their offices and transport them around the Capitol complex. However, there are some executions, including on the House and Senate floors. In recent weeks, Republican lawmakers, including Boebert, have touted [sic] the regulation and opposed what they perceive as restrictions to it."

What did people say about her background?

"Here's the reality, if someone wants to have a shrine to their gun fetish as a Zoom backdrop in their private life, they can do it. But this is our hearing room. And at some point, we will get past the COVID epidemic and we'll all start showing up in person. And our safety and our ability to conduct business civilly without feeling threatened is a relevant consideration, unfortunately," he said during the hearing.

"Let's call this what it is — a political stunt. I never stacked guns on a bookshelf when at war, let alone on a Zoom in my living room. Unless you're on patrol in Afghanistan, this is the right way to store a gun," Crow said in a tweet with a picture of a gun safe.

On Twitter, Rep. Katie Porter (D-Calif.) added, "I always thought my dirty dishes piled up and accumulating bacteria were the most dangerous thing in a Zoom background."

I always thought my dirty dishes piled up and accumulating bacteria were the most dangerous thing in a Zoom backgro… https://t.co/WtA05G9qdt

The move garnered substantial criticism elsewhere on social media, where Boebert fired back at a commenter who panned her for "unsafe gun storage."

"Who says this is storage? These are ready for use," she wrote.

Who says this is storage? These are ready for use. https://t.co/y9fxckjcGl