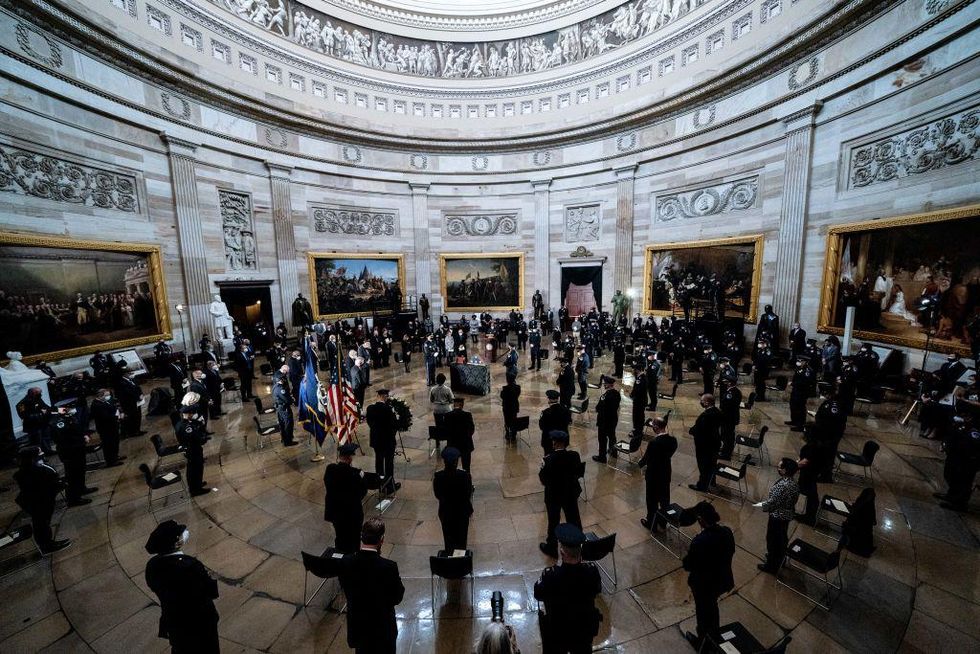 The mother of fallen Capitol Police Officer Brian Sicknick — whose death following the riot at the U.S. Capitol earlier this year became a rallying cry for many insisting that former President Donald Trump be impeached — is now speaking out about the erroneous reporting regarding her son's death.

In an interview with the Daily Mail published Monday, 74-year-old Gladys Sicknick said she believes her son may have suffered a fatal stroke during the riot, but unequivocally denied that he was killed due to being bludgeoned by a fire extinguisher, as has been widely reported.

Troublingly, she also noted that though it's been more than a month since the riot, the family still remains in the dark about key details involving her son's death.

"He wasn't hit on the head, no," Gladys Sicknick told the outlet. "We think he had a stroke, but we don't know anything for sure. We'd love to know what happened."

In the initial report of Brian Sicknick's death, Capitol Police said only that Sicknick was "injured while physically engaging with protesters" during the riot.

"He returned to his division office and collapsed," the memo added, noting that he was "taken to a local hospital where he succumbed to his injuries."

But the following day, the New York Times published an explosive story, based on the flimsy account of two anonymous law enforcement officials, claiming that Sicknick, 42, died after being struck in the head with a fire extinguisher. That story set off a firestorm of anger and grandstanding, as anti-Trump lawmakers and mainstream media members alike branded the riot a murderous insurrection.

Without verifying facts about the case, Democratic House Speaker Nancy Pelosi (Calif.) called for the "perpetrators" of Sicknick's death to be "brought to justice," and emphatically labeled the riot as a "violent and deadly act of insurrection."

The Associated Press parroted the Times report, and Slate ran an article with the headline: "Police Officer That Rioters Hit With Fire Extinguisher Dies, Making Capitol Siege a Murder Scene."

Yet a month later, a major development in the case occurred when medical examiners reportedly did not find any evidence of blunt force trauma during the autopsy. But the development, which seemed to counteract the narrative of a murderous insurrection, has been largely passed over by mainstream media organizations. The New York Times eventually updated their article, albeit quietly.

Investigators are now reportedly exploring various other causes of death, including the possibility that Sicknick became ill after ingesting a chemical irritant such as pepper spray, or perhaps had a pre-existing condition that was exacerbated during his confrontation with rioters.

Yet what has been true for more than a month since the riot remains true today: Authorities are staying quiet.