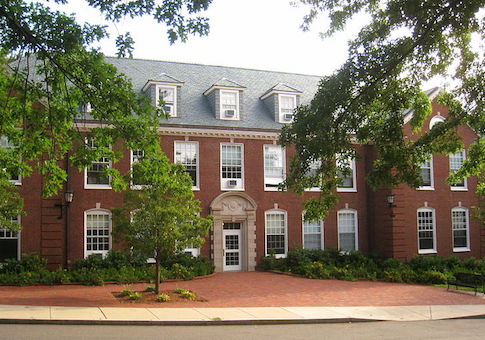 Tufts University's student government is moving to impeach a Jewish member who opposed a referendum that blamed Israel for militarizing police in the United States.

Max Price, a junior and member of Tufts Community Union Judiciary, objected to a resolution that erroneously claims the university sent campus police to an Israeli police training program. He has since faced months of harassment and anti-Semitic attacks from his peers, he told the Washington Free Beacon.

Tufts Students for Justice in Palestine, which introduced the resolution to condemn the so-called Deadly Exchange, also filed the complaint to have Price removed from his leadership position.

Lawyers representing Price from the Louis D. Brandeis Center for Human Rights Under Law on Tuesday demanded Tufts administrators take action to stop the impeachment hearing, which is scheduled for Feb. 28.

Anti-Israel groups like Students for Justice in Palestine have successfully pressured college students to condemn Israel on campuses across the country. The reported number of anti-Semitic incidents on college campuses has soared in recent years, according to an Alums for Campus Fairness study. More than 50 percent of Jewish college students have either witnessed or endured anti-Semitic harassment.

Tufts Students for Justice in Palestine wrote in a Facebook post at the time that the referendum condemned the "violence of the Israeli occupation" and affirmed that "militarized" police training in Israel is "actively harmful to the black, brown, indigenous, and Palestinian students on campus."

The resolution falsely claimed that Tufts sent officers to participate in the training and that the program was conducted by Israeli military personnel. In reality, the Anti-Defamation League sponsored the program—led by both Israeli and Palestinian police officers—and invited officers to attend.

At the behest of Students for Justice in Palestine, members of the student judiciary committee asked Price to recuse himself from further deliberations after he pointed out a series of factually incorrect assertions in the referendum. Students for Justice in Palestine members called Price "biased" in emails. Other student leaders said Price's Jewish identity created an "unavoidable conflict of interest."

Price refused to remove himself from discussions after a judiciary meeting found his views did not demonstrate bias. That prompted Students for Justice in Palestine to demand that Price's microphone be silenced in a final virtual meeting to discuss the language in the referendum.

The judiciary committee relented, and Price was unable to speak at the meeting.

A barrage of harassment and bullying from anti-Israel students ensued, Price told the Free Beacon. Students called him "a racist, a fascist, a Nazi," and "an enemy of progress."

The school has largely ignored Price's complaints, he told the Free Beacon. Administrators referred him to Tufts's Office of Equal Opportunity, which told Price it doesn't deal with allegations of anti-Semitism. Price said he thinks the office is uninterested "in being honest about the liability" that the university has exposed itself to, as it's failed to stand up for Jewish students.

Collins could not provide comment on Price's allegations or upcoming impeachment hearing.

In a statement obtained by Jewish Insider, Price says "the specter of anti-Semitism, often under the guise of anti-Zionism, has haunted [his] Tufts experience from the beginning." Price started at Tufts in 2018, just after the student government passed a resolution endorsing the Boycott, Divestment, and Sanctions movement.

More than 2,000 incidents of anti-Semitism have been reported on American college campuses since 2017. A report that the Louis D. Brandeis Center sent to Tufts president Anthony Monaco recorded more than 30 recent incidents of anti-Semitism at the university. One Tufts student found a swastika on his dorm room door in 2019. Last year, an Israeli student group called on the university to investigate a Tufts dental student who tweeted a series of anti-Semitic threats, including, "I will fuckin cremate you Jewish bitch."